I went to Hornbach store behind my house and ended up buying a simple cheap LED dimmer (8 EUR) with remote control. The issue with it was, that it is a DYI component, which connects on the cable in between the power source and the lamps. So I would either have to cut the cables of the original power sources delivered with the lights, or buy a new 24V power source.

The dimmer is a simple device, which allows to set the intensity of the LED lights in about 6 steps. The downside is that there is no possibility of scheduling. So I use one lamp with the original scheduler from the lamps manufacturer and the other lamp I operate manually with this remote operated dimmer. 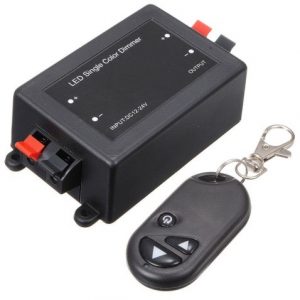 I have finally decided to replace my T5 lamps used in my aquarium. Before, there were 4x80W T5 neon tubes in my aquarium setup. 320W of lights produces quite a lot of heat and the consumption is not insignificant.

The decision was to use LED tubes replacement, which promised to compensate the light quality with half of the wattage.

So I went for high-end LEDs which are mountable in the T5 holders. 2 things surprised me after the package arrived:

Another joint problem was that the dimmer was designed to handle only one of these big lamps. So I either had to buy another dimmer for 80EUR or to switch on the lights on one of the lamps with the electrical clock I used before.

Another problem of its own with the dimmer was that it you configure the required timing using the buttons on the device. I have the aquarium at home set up in a way that when I want to access the technology in the stand under the tank, I need to push away the couch. The couch is quite heavy. While I am happy to do it every 2 months when I need to clean the filters or replace CO2, to do this every time I want to modify the lights seemed very unreasonable. (sometimes you just want to switch the lights off for a reason, or let them on longer in the evening).

Facebook-f
We use cookies to ensure that we give you the best experience on our website. If you continue to use this site we will assume that you are happy with it.Ok